Waiting for the Walk

Baseball is more than a game. Baseball is a complex system of competition intertwined with lessons and challenges throughout. It teaches taking on life and business one pitch, one swing at a time, and mastering the skills to be a winner, and then executing those skills.

In this series we are looking at some of the business and life lessons to implement into our own wisdom.  Comment below to share your thoughts, insights and wisdom.

A walk is almost as good as a hit

It was little Johnny’s first time in Little League Majors. He was only 9, but he was facing pitchers two years older and much bigger than he was, and it showed. But Johnny was a smart, fast kid, so he figured he’d play it safe to get on base. 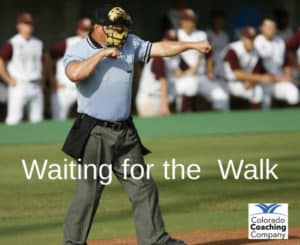 He knew that even though they were more experienced than he was, many of the pitchers couldn’t throw consistent strikes. If he just stood there, crouched down a bit to make a smaller strike zone and didn’t swing, maybe he’d get lucky and get walked.  Plus Johnny knew that once he was on base, he could easily steal second.  A walk was almost as good as a double.

His first time up to bat, it worked. After three balls and two strikes, the pitcher threw a fourth ball for a walk. He was on base, and he didn’t even have time to steal but he did manage to score a run when the kid behind him hit a long ball to the left field fence on the very first pitch.

His strategy worked so well, he decided to try it again the next time he was up. This time, he didn’t even make it to a full count. With a two and two count, the fifth pitch was a called strike, and he walked back to the dugout for an out. He hung his head for only a moment before thinking, he was one for two for getting on base.

The next inning as he approached the plate he thought about taking a swing. He took some great practice swings.  Imagining the feel of the ball hitting the bat. As the first pitch screamed by, he tensed up — he stood there as three straight strikes went right by him. Out again. Still, scoring one run in his first Major League game wasn’t too bad — right?  There were other kids who hadn’t even been on base the entire game.

After the the final out of the game and congratulating the other team, his coach went over everyone’s batting average. Johnny was a little surprised when the coach read his name aloud and said, “Zero.”

Zero? How could you have a “zero” batting average? He had never heard of a zero batting average.  This couldn’t be right. He scored a run. He had been on base.  His coach saw the confusion and hurt on his face, so after the treats had been handed out, he pulled the little boy aside. “Coach, I don’t understand. How do I have zero?” asked Johnny with tears welling in his eyes.

The coach put his arm around Johnny’s small shoulders, leaned in close and whispered as he squeezed his shoulders, “Son, you have to swing to get a hit.”

You have to swing to get a hit

You have to swing to get a hit. Those words reverberated in Johnny’s brain. Maybe it wasn’t good enough to get on base just because the pitcher couldn’t do their job and throw strikes. Maybe he did have to take a risk to get in the game. Maybe he needed to rely on his talent to make a difference.

You know how the story ends – the next game, Johnny went in there swinging. Sure he struck out every time and never got on base that next game, but over the course of the season, he hit some, he got out some, he struck out and he even got walked a couple of times. But he never forgot his coach’s wise words: You’ve got to swing to get a hit.

How about you and your business? The same is true in business. Sure, you can score every once in awhile because your competition is so bad that customers will choose anything else. But to really be a superstar and make something happen, you’ve got to get a hit. And to get a hit, you have to start to take some swings. It’s as simple as that.

Sure swinging doesn’t guarantee that you will get a hit, but it will guarantee that you begin to develop the necessary skills and feedback needed to make contact.  Doing nothing will only create a fear.  A big insurmountable fear  that will ultimately take you out of the game entirely.

So what are you doing to make sure you are swinging everyday?  What can you do right now to take a swing?

We use cookies to ensure that we give you the best experience on our website. If you continue to use this site we will assume that you are happy with it.Ok