A master was explaining a concept to a student, not a brand new student, but a senior student who had learned many things. His head was filled with knowledge and experience to draw upon. But each time the master tried to explain something new to the student, the stubborn student kept trying to hold it up against his own notions of how the world is and how it ought be, and he was unable to see the lessons in what the master was trying to teach him. 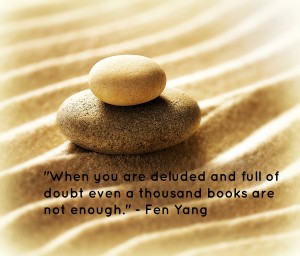 The student said, “Master, you can’t pour anything more into my cup. My cup is full”, and the master replied “Yes I know.” “And I can’t give you any new thoughts or perspectives on life’s lessons until you clear your head of thoughts and beliefs that are already filling your mind.” Then the master paused, meeting his student’s eyes with his own knowing look said calmly but sternly: ” If you truly seek understanding, then you must first, empty your cup!”

The student pondered for a moment with a look of absolute bewilderment. Then a look of enlightenment came over him, followed by a smile, and a look of receptiveness. The master started to explain again, and this time the student saw what the master was trying to say.

A zen slap represents a moment of unexpected enlightenment when something becomes blindingly and undeniably obvious to you. It often brings a feeling of elation, relief, and discovery, even as you laugh at yourself for missing the obviousness all along.

The ZenSlap, in whatever form, shakes together pre-existing knowledge in the recipient’s head, so they see what they (in principle) already know but didn’t see. The right slap can bring two thoughts together that had been sitting next to each other, but unconnected, for a long time… or a set of thoughts needing only one more to make a complete set. At the wrong time, a slap (finding only the one thought) only hurts. The art of the master is to recognize when the thoughts are there.